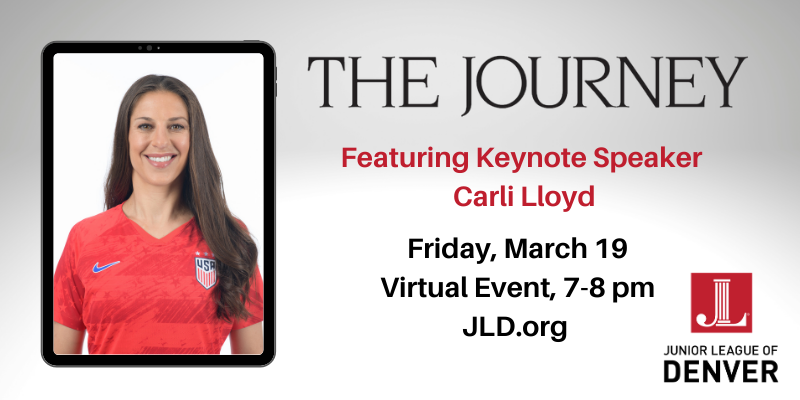 Carli Lloyd is an internationally renowned soccer player who holds some of the highest accolades in the sport in history. She is a two-time Olympic Gold Medalist, two-time Fifa Player of the year and is the only American to score multiple goals in three separate Olympic Games. It is arguable that her scoring three goals in the first 16 minutes of the 2015 World Cup Finals match against Japan, is one of the most historic moments in sports.

Off the field, Carli is a role model who empowers fans to be mentally tough and to never give up on their dreams. She still serves as a mentor to her former youth club, The Medford Strikers. In 2016, she chronicled her personal journey in a memoir, “When Nobody Was Watching”, which is a New York Times best seller.

The Junior League of Denver, Incorporated (founded in 1918), is an organization of women committed to promoting voluntarism, developing the potential of women, and improving communities through the effective action and leadership of trained volunteers. Its purpose is exclusively educational and charitable.

By continuing to use the site, you agree to the use of cookies. more information